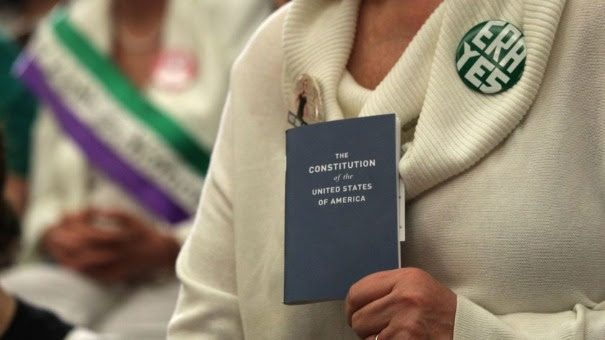 (January 3, 2020) New York, NY — The ERA Coalition commends Governor Andrew Cuomo for supporting an effective and inclusive Equal Rights Amendment to be added to New York’s Bill of Rights. The ERA Coalition has led this effort over the past year working with the Governor, the Legislature, and other interested parties. Board Chair Maria Vullo said, “I applaud Governor Cuomo for today’s announcement of support for an inclusive Equal Rights Amendment as part of New York’s Constitution.  We look forward to continuing our work with the Governor and New York’s legislative leaders on an inclusive and effective ERA in New York.  With first passage of an inclusive ERA this legislative session, New York once again will lead the way in promoting equality for all.  The ERA Coalition is proud to be at the forefront of this historic moment.”

The ERA Coalition thanks Governor Cuomo for his commitment to recognizing the diversity of our state and supporting an inclusive ERA as part of New York State’s Constitution. Co-president Jessica Neuwirth stated, “We are so pleased that Governor Cuomo is taking this historic step to put the state of New York in the forefront of constitutional equality. We hope that states across the country will follow his lead, ensuring that every single citizen is represented at the highest level of our law, and that the rights and privileges of every person are legally protected.”

ERA Coalition CEO Carol Jenkins added, “The work of the ERA Coalition is broad constitutional equality. We fight for it for women by helping to amend the U.S. Constitution; we fight for it for every citizen in this country and are proud that New Yorkers have the support of the Governor for full-fledged protection and rights. We are proud to have taken part in this effort.”

For more information about the Equal Rights Amendment and ERA Coalition, please visit our website.

About the ERA Coalition:

The ERA Coalition was founded in 2014 to bring concerted, organized action to the effort to ratify the Equal Rights Amendment. The ERA Coalition has a sister organization, the Fund for Women’s Equality, which promotes public education and outreach on the need for constitutional equality. Comprised of nearly one hundred organizations across the country, the Coalition provides education and advocacy on Constitutional Equality.